Life on Maui: the Ono and the Junk

Posted on November 11, 2013 by Ancestors Within

A couple weeks ago, I came across a well-written piece by an FOB couple here on Maui about their experience finding work and their perspective on making a life in this slice of paradise. Their advice was sound, but since I’ve got my own pro and con list of life on Maui, and since raising a family on Maui is different from having a fun, adventure-filled chapter or comfy, reaping-fruits-of-labor retirement, I’d like to throw my own side onto the mixed plate.

Who we are: thirties, baby, dog, dual income, uncomfortably middle class.
Who we aren’t anymore: extreme risk-takers, partyers.
Who we will probably never be: owners of a multimillion dollar second home. (Or first.)
But we are also: responsible enough to have life insurance and ROTH IRAs. And free-spirited enough to live a simpler life so that it can be in paradise.

So, Maui: the ono and the junk!

The natural beauty of this place is seriously obnoxious. The rainbows, the waterfalls, the whales breaching, it’s a freaking Lisa Frank sticker. Every direction you turn, you are confronted with some breathtaking wonder. Even on the most mundane of days, there’s a gorgeous commute to get you there, and there’s the intoxicating scent of the tropics in the night air when you head home.

The price tag on paradise ain’t cheap. Ranked the state with the highest cost of living, we pay more for just about everything: gas, housing, energy, any shipped goods, healthcare.

According to research compiled for this Civil Beat article: The average income necessary to own a home in Hawaii is $115,949. The median cost of renting a two-bedroom apartment is $1,671/month, the highest in the nation. That’s why as a family of three plus dog, we live in a studio. (Sucks!) Furthermore, we pay triple the national average on electricity, 70% more on food. Add to that a child in daycare, and you can see why I said “uncomfortably middle class.” The gross on the paychecks doesn’t look all that bad, but it turns out, it’s bad.

People who live for very little here love to tout all the ways they do it – live with less, live with smaller, buy secondhand, hang dry clothes, shop farmer’s markets, get a Paloma, grow a garden, hitchhike, live in a tent (seriously!) Some of it’s practical and responsible, but with a baby and a full-time job (even if mine ranks last in “salary comfort index” in the country) there’s only so much off-the-grid-style living we can really adopt.

Perhaps it’s because of the high cost of living, or more probably, it’s cultural, but fortunately, I don’t feel the same pressure to maintain any kind of urban, stylish appearance. It’s a very casual, beach culture here, which suits my style. A friend on business here told me it’s the only place she doesn’t wear a suit to meetings, because it “would be insulting.” I don’t have a $200 bill for my hair every two months. I don’t spend $350 on boots every winter. I get away with wearing slippahs (flip flops) to work. We don’t have TV, and it’s not that weird. Our dog’s not purebred, and nobody’s is. And if you’re going to spend an obscene amount of money on a vehicle, it better be a giant truck with shiny rims.

Maybe it’s just our down-to-earth circle, but there’s no one you’ve got to impress around here. Maui types are very low maintenance. In fact, it can be almost jarring to see a vacationing hipster walking down the street, reminding you that there are places where people agonize over the right shade of red lip or whatever.

While there are many positive indicators of Maui’s economy, it remains a place heavily reliant on tourism, which generally doesn’t provide the high-paying jobs it takes to get ahead in such an expensive place. Local politicians always talk about diversifying the economy to provide higher paying jobs, but it’ll take creative thinking on how to really make that happen, being in such a remote location.

Add to that a less-than-stellar education system. While recently ranked just below the national average, our schools score particularly low on student achievement (D+) and college readiness (F). Working in education myself, I always take those “rankings” with a giant grain of salt. There’s so much at play in the education of a child, and every district across the country faces a unique set of challenges. However, I believe when opportunities to get ahead appear scarce in your community, what’s the point in preparing for them? Furthermore, there is no school on island to get a competitive higher ed degree. (The community college just recently began offering some four-year degrees.)

It’s easy to not care that you don’t wear a power suit to work and make six figures when you can go to the beach every day (or even for pre-work surf sessions), and you can trade your neighbor your avocados for his mangoes. It’s just a simpler, less competitive way of life, which suits some.

A biggie. How did we get this far in our discussion without mentioning that it’s 75 and sunny 360 days a year? You can count on one hand the number of times you get goosebumps in a year. You can go all year without seeing your breath. You can get fresh, local produce year round. You can have a constant sun-kissed glow. You don’t need to take vitamin D supplements or put yourself under lights to stave off depression.

On that note, for such a small island, Maui has mind-blowing biodiversity and microclimates. There’s lush jungle with rain, waterfalls, and big fat frogs. And just a ten minute drive will take you to barren, volcanic wasteland.

What we don’t have, however, is diversity of seasons. No drives for the fall colors. No curling up by the fire with a hot cocoa and gentle snowflakes falling outside. No sparkly blanket of newly fallen snow.

(Also no shoveling, no scraping off your car, no not feeling your fingers, no dreading getting out of the shower, no pasty white skin.)

Ono: Things to Do

Then there are the hundreds of other things (many of which are free or incredibly cheap) to do outside: camping, hiking, biking, constant festivals and block parties, outdoor concerts, golf, disc golf, paragliding, sports of all kinds, ziplining, ATVs, horseback riding, jumping off waterfalls, checking out lava tubes and petroglyphs and heiaus and on and on.

Junk: Things You Can’t Do

But we’re still a community of 144,000. Chances are your favorite band won’t be touring here. There’s no major league sports. I’ve got nothing but love for the Maui Arts and Cultural Center bringing us really fantastic events that are worthy of any metropolis, but we simply don’t have the population to support the flood of choice you’d find in a big city. The arts are not everywhere you turn, and many of the would-be audience opts to enjoy the beach instead. Still, if you’re craving a museum or art or a live performance or music, you can find plenty of it here – you just need to know where to look. And on the sports note, I personally prefer spending $20 for a family of three to go to a Maui game than deal with parking in a major metro area.

Hawaii has a fascinating and rich history that has laid the groundwork for the unique mix of cultures that make up the land today. There’s no way I can keep this to a paragraph or two, so, deep breath: celestial navigation on outrigger canoes, centuries of moon cycles, night marchers, Kamehameha, Battle of Kepaniwai, paniolos (real cowboys), the Great Mahele, missionaries, whalers, Liliuokalani, Father Damien and the leper colony, the Overthrow, picture brides for plantation immigrants, the Massie Trial, Duke Kahanamoku, the Niihau Incident, Hawaii 78, Israel Kamakawiwo’ole, Sovereignty… I need Billy Joel up in here.

Junk: The Sometimes-Emotional Dynamics Which Can Result from a Complicated Past

All that past turmoil can’t just get swept under the rug. I find that oftentimes barriers are easily overcome by just looking people in the eye. I love the warm aloha spirit you find here – the fact that children call me “aunty” and that I can “talk story” with strangers. But under the surface, just as you’ll find in many places, there’s a much more complicated story. This is a place with a painful past – a past that deserves respect, and that many people feel needs to be righted. This is a place with many subcultures cohabiting – Hawaiians, haoles (multi-generational), Filipinos (multi-generational), Japanese, Micronesian, Portuguese, more and more Latinos, and all these different perspectives coming together can occasionally cause misunderstandings and bad feelings, and ultimately different ideas about whose place and what place this is. This is part of the beauty of Hawaii, and part of its pain.

Personally, I haven’t felt severe “island fever.” For someone who spent a very claustrophobic decade country-hopping, I am surprisingly comfortable staying put on a rock in the middle of the Pacific – 2400 miles away from the nearest land, to be precise. Others don’t do so well.

However, I don’t enjoy being so far from family and friends. I do miss them and wish I could make it back to ten times the number of events and holidays that I actually do. Also, for someone who loves to travel, it sucks paying thousands to get anywhere at all. No great deals to be had over here. 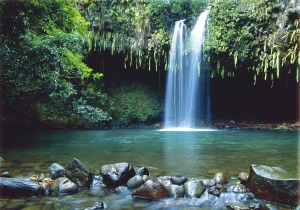 I saved the best for last when I say that ultimately ONO wins out for me where Maui is concerned. That’s because Maui (and Hawaii in general) has this intangible mana that trumps all the rest. It’s a spirit that goes back further than the ancient Tahitians, back further than any humans that set foot on this land. This place has a power that demands reverence. It makes griping about the price of gas or the fact that the indie movie only lasts a week here seem irrelevant. This place has an indescribable magic. Not everyone feels it, and that’s okay. Other places have their own particular mana that I may not feel, but that I can admit is there all the same.

Uncovering the stories of our ancestors written in our DNA
View all posts by Ancestors Within →
This entry was posted in Hawaii, Maui and tagged 808life, hawaii, life in paradise, maui, mauinokaoi. Bookmark the permalink.