When we were expecting our second child I worried about how our first would adjust. He would be two years and a few months when his little brother was to arrive, not talking much, still very dependent on us, sleeping in our bed, with a sensitive little personality. How would he handle mommy nursing a tiny baby around the clock, another little crying voice begging to be held? Even the logistics of leaving him while I gave birth caused me concern. Of course he’d survive, but would suddenly being without me be a painful transition into brotherhood? (It ended up being four nights with my parents, sleeping in their bed, handling it bravely.)

When he came to meet his baby brother for the first time, Micah was solemn, shy, almost reverential. A little unsure how to feel, he gently stroked the baby’s tiny bald head. I had to stay bed-ridden in the hospital longer than desired to recover from an emergency C-section, and there wasn’t much there to entertain an active two year-old, so his visits didn’t last long. Maybe this unexpected time of separation was a good transition for everyone.

When we were finally reunited I was surprised and thrilled by the joy Micah took in this new presence in our family. I kept waiting for some insecurity, jealousy, resentment – even just a tiny hint of it to creep in – but it never appeared, not even once. In that first month, two brothers laid side by side on the bed, and I bent over Micah to tickle and kiss him. In his breathless toddler glee, he composed himself, and instructed, “Nico’s turn now, Mama.” I’d been so conscious of making sure Micah didn’t feel slighted or left out, and here he was making sure Nico was loved every bit as much. I was told by more than one seasoned mother that my love wouldn’t be split, but only multiply. A toddler didn’t need the lesson, he knew.

From the beginning he delighted in his new brother, squealing whenever a new milestone was hit, knowing it was a step closer to having a real playmate. When he disturbed the baby sleeping – usually unintentionally, but a few times intentionally so he could play and interact with him – our response was to explain that letting the baby sleep will help him grow bigger, so he can play with big boy toys and games. He found this a very satisfactory explanation, and would generally noticeably control his volume.

Even as Nico grew and became interested in toys that Micah felt protective of (for example, ripping apart train tracks that he had meticulously built), there was impressive restraint in his responses. “You take Nico away from here!” was usually his go-to. But no major aggression. Sometimes barricading, never hitting.

It’s been beyond my hopes and expectations, especially as Nico’s exiting babyhood and becoming more interactive. They’re starting to invent little peekaboo games and get a kick out of making each other laugh. We all sleep together, and they both get big sleepy grins first thing in the morning when seeing each other. 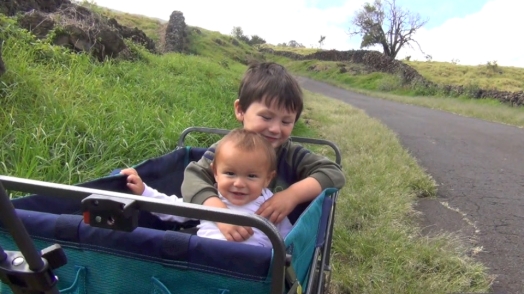 It may be too simple to say that love is limitless, but Micah’s showing me that it is much more generous than I realized.
*

Micah is a sweet-natured three year-old. Shy at first, but quickly opens up, and then proudly introduces his baby brother to strangers, picks them flowers, says, “Auntie, watch this!” and then makes up something, anything to do, once he has their sometimes-bewildered, sometimes-charmed attention.

Watching him trusting the world this way, seeing each new person he meets as a potential friend, is excruciating.

He had his first dental cleaning the other day. I was worried he wouldn’t sit still. I prepped him as best I could in advance – told him how important it was that he listened to the dentist. Maybe I didn’t need to. From the moment the dentist appeared stone-faced into the room, Micah sat in stunned silence in that chair. The dentist worked efficiently and without humor. He’s been at the job of pediatric dentistry a very long time, and maybe long ago it held some charm. Still, he was a fine dentist, and took the time to look at a concern I have about the baby without seeming at all put-out that this wasn’t the patient.

But I was disappointed for Micah. I didn’t need the dentist to be a clown, but it would have been nice for him to appreciate the enormity of the event of a three year-old’s first visit. Places are very very big at that age, experiences overwhelming.

When the appointment ended, we made our way into the lobby. Micah stopped to admire the big toy bus he’d been very prematurely torn away from when we arrived. We were the only patients in the office, and I suddenly got a self-conscious feeling, like the tiny staff were waiting for us to leave so they could eat lunch. I hurried Micah to the door, and could see him fight back a meltdown. I’d promised the bus! But the atmosphere was too austere for meltdowns. We reached the door, and he turned to say good bye to the dentist, who was talking to the receptionist behind the desk.

Shyly he tried. No response. The dentist hadn’t noticed. I encouraged him to try again, and he did just a fraction louder. Still nothing. So after a split second’s hesitation, I ushered him out, trying to distract with a promise of snack in the car. It’s a silly little thing, but now I wish I’d tried harder for that proper good bye on Micah’s behalf. I’m not ready for him to stop viewing everyone as a new friend. I’m not ready for him to lose that pure three year-old trust, openness, and love. The dentist should keep saying good bye. Genuine good byes with real smiles. Not just when they’re three, but especially when they’re three.

Uncovering the stories of our ancestors written in our DNA
View all posts by Ancestors Within →
This entry was posted in Brothers, love, Musings and Introspection, Parenting, Uncategorized and tagged Brothers, love, motherhood, openness, parenting, siblings, trust. Bookmark the permalink.